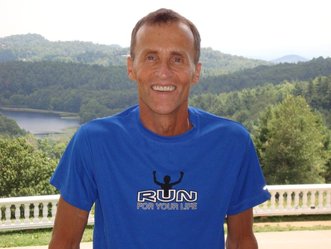 Dick Beardsley is a best selling co-author and champion - in running and in life. Although his competitive running career as an elite athlete ended in 1988, Dick is still one of the top American distance runners of all time, reflected with a time of 2:08:53 in the 1982 Boston Marathon. Best known for his 1982 Boston Marathon "Duel in the Sun" with Alberto Salazar, Dick is also a two-time Olympic Trials Marathon qualifier. He is a two-time winner of the Grandma's Marathon in Duluth, Minnesota, with a time of winning 2:09:36 and co-winner of the 1981 London Marathon, with a time of 2:11:48.  Dick is also the course record holder for the Napa Valley Marathon, with a winning time of 2:16:20 in 1987.

But Dick is more than a running champion. He is a fighter. After a series of near-fatal accidents and a journey of self-discovery, Dick has turned his life around and is enjoying life to its fullest.

DICK'S EARLY RUNNING
His running career began inauspiciously in a tiny farming community west of the Twin Cities. Shy by nature, Dick noticed that one way to break the ice with girls was to wear a high school Letterman jacket. He hauled all 130 pounds of himself to the football coach, where he lasted one practice. He changed his focus to running, where he wasn't as likely to be killed, and although enthusiastic, was far from top dog on the cross-country team. However, the coach did let him run enough meets to qualify for a Letterman jacket.

Dick ran in college, and after graduating with an Associates Degree in Agriculture, he got into dairy farming.

Dick ran his first marathon in 2:47:14 at the 1977 Paavo Nurmi Marathon in Hurley, Wisconsin. In subsequent marathons he steadily lowered his times: 2:33:22, 2:33:06, and 2:31:50, which ultimately led him to be part of the Guinness Book of World Records as the only man to have ever run 13 consecutive personal bests in the marathon.
DICK'S ELITE RUNNING CAREER
In 1980, seeing that the qualification time for the U.S. Olympic Trials Marathon was 2:21:56, a mere 10 minutes faster than his best time, Dick entered the Manitoba Marathon in Canada and made the Trials by 2 seconds. At the Trials he ran 2:16:01 for 16th place, continuing a streak of personal records that eventually spanned 46 months and 13 marathons. He was so encouraged that he decided to try running full-time for the next four years with the hopes of making the 1984 U.S. marathon team.

It was the height of the 1980's running boom and running shoe companies were looking for some exceptional elite runners.  Dick managed to secure backing from New Balance, which enabled him to train full time pursuing his running career.

Eight weeks later, Dick ran the first-ever London Marathon in 2:11:48 (another PR), tying for first place with Norway's Inge Simonson. Three months later, Dick ran what he considers his breakthrough marathon, a 2:09:37 win at Grandma's Marathon. In the wake of his successes at London and Grandma's, New Balance continued their wonderful support of his running and, of course, with Dick and an individual.  Dick was thrilled and humbled.

His PR spree ended, however, when he took second in the '81 Stockholm Marathon, with a time of 2:16 and the 1982 Houston Marathon, with a time of 2:12. Then came the 1982 Boston Marathon, and Dick's famous "Duel in the Sun" with Alberto Salazar, where he ran 2:08:53 and once again took second - this time by a mere 1.6 seconds. Two months later he again won Grandma's with a time of 2:14:49, but came out of the race with Achilles tendon problems; the injury persisted and later in the year he managed to take only 30th place at New York with a 2:18:12. Dick had the tendon surgically repaired in 1983 and hoped to recover by getting a "bye" into the 1984 U.S. Olympic Trials Marathon, but he was turned down. He went into training and re-injured the tendon in a futile attempt to qualify for the Olympic Trials at the Los Angeles Marathon in 1984. The tendon was operated on again, and Dick took several years off from competitive running to build his dairy farm into one of the top producing herds in Minnesota.  He worked just as enthusiastically on his his fishing guide business.  Dick is well known in the Minnesota as one of the best fishing guides in the state.

But the call of an Olympic team surfaced again in 1986, and Dick returned to training, qualifying for the Olympic Trials with a finishing time of 2:16:20 at the Napa Valley Marathon in March of 1987. Dick finished the 1988 Olympic Trials with great disappointment, finishing in 45th place in 2:27:21. Dick retired from competitive running and subsequently slid into a nightmare that would consume him for years.
DICK'S ACCIDENT
In November of 1989, while working on his dairy farm, Dick was using an auger on the back of a tractor to lift corn into a crib. Somehow he became entangled in the auger and it began to tear him apart. Before he lost consciousness, he managed to stop the machine. "To this day, I still don't remember how I did it," Dick recalls. "I broke all the ribs on my right side, my right arm, mangled my left leg, and beat up my head pretty badly. I was crawling on my belly toward the house when I was found. I was laid up for five months."

Dick recuperated enough to continue working on the farm and even to hobble through an occasional run. Then, in July of 1992, while driving, he was blind-sided by another driver, and Dick spent 15 days in the hospital with an injured back and neck. In January of 1993 while on a run during a snowstorm in Fargo, Dick was hit by a truck, which put him back in the hospital for two weeks. A month later, again in a fierce snowstorm, he was in an accident, and rolled his vehicle numerous times, damaging his already tender back and neck.

In January of 1994 Dick underwent his first of many back operations. He was operated on again in March to remove some of the hardware the surgeons had installed and then had a third back operation in October. A year later he had knee surgery to repair some damage due to the farm accident.
DICK'S ADDICTION AND RECOVERY
With each hospital stay, Dick was prescribed pain medications. As his tolerance to the medications increased, he was prescribed more and more pain pills. He suffered a litany of disasters and he persevered, but at a price.

"I knew I was addicted," Dick recalls. "But at the same time I was in denial."

Then he received a call from his father, whom he learned was dying of pancreatic cancer. It was too much for Dick to handle. He wanted to visit his father, but he was low on his prescription pain medication and his doctor was out of town. He had a prescription in his wallet so he doctored it, photocopied it, and forged a signature, photocopied it again and forged a signature. By the end of the day Dick had collected pain pills from nearly a half-dozen pharmacies. "At the end of the day I had 240 pills," he said.

He suffered his father's death while his addiction spun out of control. "My whole world revolved around pain medication," he told journalist, Paul Kenney, in 1997.

Then, on September 30, 1996, when he was taking a cocktail of Valium, Percocet, and Demerol, all very highly addictive narcotics, 80 - 90 pills a day - he was caught. "It saved my life," Dick recalls. "Getting caught put the brakes on my downward spiral."  Dick spent hours with DEA agents, convincing them that he was taking them all, every last one of them and not selling them, as they had suspected, given the high number of prescriptions.

After a lengthy stay in a Fargo psychiatric unit, prescribed methadone, outpatient treatment, then inpatient treatment, going cold turkey on the methadone, and more outpatient treatment, Dick emerged in February 1997 free of drugs.
DICK'S LIFE TODAY
Since that fateful time in 1996, Dick has turned his life around. In spite of a series of accidents that would have put a mere mortal into a wheelchair for the rest of his life, Dick managed to restart his running program. He ran the 2000 Napa Valley Marathon in 3:23:05, and he trained in 2001 to try to break 3:00 at Grandma's to celebrate the 20th anniversary of his breakthrough performance there. He succeeded, running a fine 2:55:39. Dick called this Grandma's his "biggest triumph."He returned to Boston to run in 2002, celebrating the 20th anniversary of his "Duel in the Sun" with Alberto Salazar. In March 2004, Dick ran a 2:43:58 at Napa, his best time since before his farm accident. Since that race in 2004, Dick has run many more marathons, all sub 2:50. Dick is also once again a member of Team New Balance. 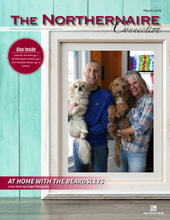 Dick has held and continues to hold several running camps and offers online coaching in efforts to help people reach their fitness goals.

Dick and his wife, Jill, are also the Innkeepers and owners of the beautiful Lake Bemidji Bed and Breakfast. Dick and Jill are featured in the March 2018 issue of The Northernaire Connection. Check out the article here.

In October of 2015, Dick's beloved 31-year-old son Andrew, a veteran of the war in Iraq, died by suicide, another heart-wrenching blow that challenged Dick in a deeply personal way. This tragic loss has once again forced Dick to call on his inner strength and continue his positive path through his life.

The story of Dick's running career alone is the stuff of legends, but it is the story that comes after that draws people in and keeps them listening. Dick is a true survivor.  Having looked death in the eye numerous times, Dick's life is a story of hope and redemption.